Everyone’s worst fear. You’ve just finished eating at one of your favorite restaurants. It’s been a few hours, and you’re feeling  nauseated. You start to sweat and get chills all at once. You’re in for a rough few days. Many people have experienced something like this in the past. While the symptoms are often different from person to person,  and case to case, it’s never a pleasant experience. With the rise in news coverage of foodborne illness, we’ve heard of norovirus again, and again, and again… But what is it? How do we prevent it from spreading? 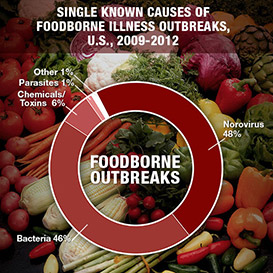 There are many different types and strains of noroviruses, sometimes called Norwalk virus or Noro-like viruses. This group of viruses is the most common cause of gastroenteritis in humans, causing as much as 48% of foodborne illness outbreaks recorded by the CDC in 2009-2012. The virus is also commonly associated with cruise ships, affecting at least one ship, three times in a row. Because of this virus’s structure, it is able to survive on surfaces long after initial contamination. Upwards of 3.5 years in still water2!

While it’s easy to imagine a viral particle crawling around on surfaces, waiting for a human host to pounce on, transmission for norovirus is actually a lot more simple, and gross. Typical transmission routes as described by the CDC are, eating contaminated food, touching contaminated surfaces or objects, then touching your mouth, or contact with an infected person.

With an infectious load of just 10-100 viral particles, even the smallest exposure can lead to illness. Contamination events, such as vomiting in a public space, can carry aerosolized viral particles a great distance. Without proper disinfection, these surfaces can remain contaminated for weeks. Another complicating factor is that human hosts of the virus shed viral particles before they display symptoms, and up to two weeks after resolution. The key time frame for the spread of norovirus is between November and April.

How to Prevent Norovirus

Reducing the risk of being the next source of an outbreak is simple. Here at Advantage, we recommend the S.W.I.F.T. Method.

As we already know from above, norovirus can stay on surfaces for a long time. That is why it is vital to regularly disinfect high-touch surfaces such as countertops/table tops, payment terminals, hand railings, door knobs, trash cans,  chair/booth arms, restroom surfaces, dispensers/drink stations, and so much more. Don’t forget about the back of the house either. Contaminated walk-in handles, prep stations, and bussing trays can quickly lead to a facility wide problem.

It’s really as simple as that. If you are managing employees, don’t allow them to work while sick either. Recently, some restaurants have even gone as far as paying sick employees to go home. The risk to your facility’s customers and reputation are just not worth it. Sick employees can be contagious for up to two weeks after being sick, though most viral activity stops after about 72 hours. This makes the next step even more important.

We do literally everything with our hands. Unfortunately, this also makes them great carriers for cross contamination. Because the chances for infection linger even after the initial onset of the illness, it is important to have an insistent hand washing routine established. Make sure all your employees know the importance of proper hand washing and have access to designated hand washing sinks, hand sanitizers, and single use gloves. Alcohol-based hand sanitizers can reduce the spread of the virus. However, they should never be used as a substitute for washing with soap and water. 3

Not all Norovirus contamination comes from surfaces. Since norovirus is stable in water, if contaminated water is used to irrigate ready to eat fruits & vegetables, if they are not washed prior to serving, it can lead to a large scale outbreak. “Food can get contaminated with norovirus at any point when it is being grown, shipped, handled, or prepared.” 4 We use FIT for all of our fruit and veggies! A good rule of thumb for any product that might be subject to recalls for any kind of food safety is “if in doubt, throw it out.”

Contamination events require an immediate response. Normal cleaning methods will not be effective on norovirus. Protocols for disinfection of norovirus include standard biohazard clean up methods, such as using personal protective equipment and using absorbent powders to soak up any bodily fluids. You should also use a disinfectant with demonstrated efficacy against norovirus. Read the label of your standard disinfectant to make sure that you are covered. If your disinfectant does not list norovirus, or feline calicivirus, a common surrogate, the CDC recommends using a standard chlorine bleach solution of at least 1000–5000 ppm for norovirus disinfection. 3

Since there are no current vaccines for norovirus, the only way to prevent its spread is through the diligent efforts of everyday people. If you suspect that you may have norovirus, drink plenty to fluids, stay away from public spaces, and make sure to wash your hands regularly, even after you are feeling better.

Click here for a free 11×17 poster describing the S.W.I.F.T. method and post it in your break room or prep areas to help spread the word.